Despite his obsessive care and curation of a $25 to $30 million collection of blue-chip supercars, “I was shocked as anyone that it became such a major hobby,” says Benjamin Sloss, vp engineering at Google. “Really, I had no clue it would turn into this.”

“This” refers to the collection at the Los Altos house that Sloss shares with his wife, Christine, of “nine ‘fun’ cars: two Rolls-Royces, six of the street-legal Ferraris, and the McLaren,” he says. Their open, well-lit, 10-car garage was designed by Christine a few years after the couple bought the Spanish-style five-bedroom house during “the heart of the Great Recession,” says Ben, 49, of the property purchased at $8.2 million and now estimated to be worth more than $17 million. Of the cars at the house, one of the Rolls-Royces, a bespoke Dawn Black Badge, valued at around $600,000, was personally delivered to him by the brand’s CEO, Torsten Muller-Otvos, at Pebble Beach this summer, while the volcanic orange $2 million McLaren P1 is one of 375 in the world.

“The six racing cars are off-site,” Sloss says of the Ford Mustang GT4 and Mustang Boss 302S, among others. “They live with their respective racing teams” — including Lesher Motorsports in Salinas, California, and R3 Motorsports in L.A. — “so that we can use them on the track.”

It’s no wonder that the “site reliability czar” — as Ben is known internally at Google, overseeing a team of 5,000 to keep the search engine well-oiled and running — would get hooked on such complex, high-performance cars as his gaggle of Ferraris. His inventory includes an F355 Spider, a trio of 458 models and the track-only 488 GT3 and 458 Challenge EVO. The latter drove the Slosses (Christine’s Instagram handle: because_race_wife) to an endurance-race win at Mid-Ohio Sports Car Course in October by a “margin of 30 seconds after 8.5 hours,” says Ben. He, Christine and a third driver had taken turns driving.

"They live with their respective racing teams" — R3 Motorsports in L.A. — "so that we can use them on the track." Benjamin Sloss, vp engineering at Google

Rounding out the Slosses’ set are the Ferrari F12tdf (which sells on the secondary market for up to $1.6 million), a LaFerrari coupe (a model was bought recently for $7 million), Aperta (which fetched $10 million at auction) and limited-edition track-only $3 million FXX-K — a surprise birthday gift to Christine from Ben.

“When Ferrari offers you something special, you don’t say no,” explains Christine, 50, of their fetish. “I feel very fortunate and I don’t take any of this for granted. I still cry when I see the FXX-K.” Ben attributes his bond with the brand to his dad: “I bought my first Ferrari in 2000, a surprise for my father on his 60th birthday. I wanted him to have one and [at the time] I couldn’t afford two. Before that, my father would call me every week and we’d talk about whatever was new at the Ferrari of New England dealership.”

Benoit Boningue — a former tech exec from the days of Netscape and Palm who went on to found 100/OCT, which produces exotic car events for Silicon Valley enthusiasts — says his favorite among the Sloss autos that he’s seen is the LaFerrari coupe: “This is a car that would be considered by most to be a collector car, and therefore would be put on mothballs in a temperature-regulated garage and never seen in the light of day. But Christine does drive it quite a bit and enjoys it, even taking it to Yosemite.” (Christine and Ben were both road hogs before they met, having first encountered each other on motorcycles — she on a Suzuki SBV650, he on a Yamaha R1 — at Alice’s Restaurant, a Woodside, California, hangout that doubles as a motorcycle destination because of the scenic roads leading to it.) 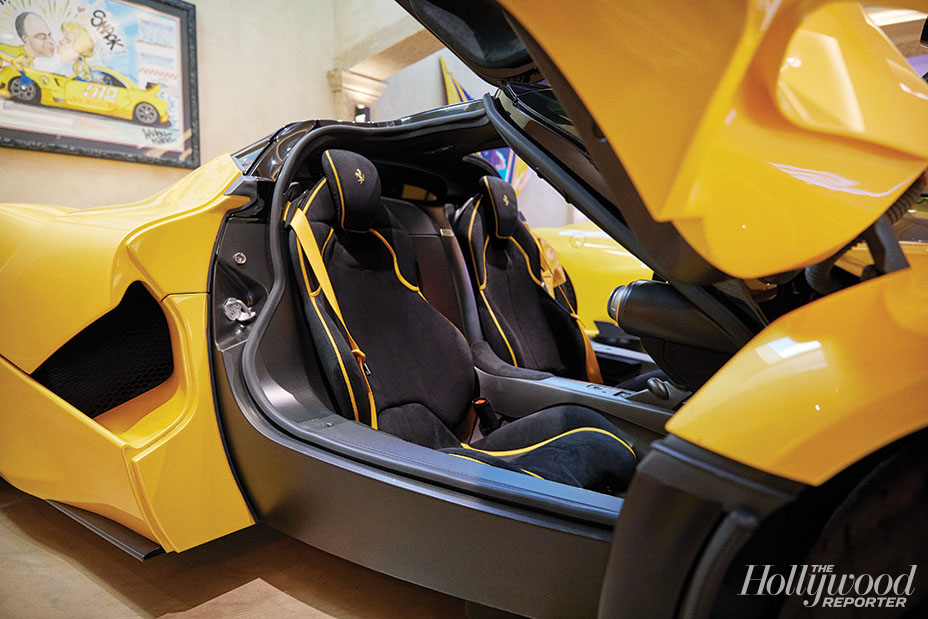 Ben, who joined Google pre-IPO in 2003, went from buying his father that one car to a succession of different models, but it was a benefit for victims of a May 2012 natural disaster that precipitated the bulk of his collection. “There was a big earthquake in the Emilia-Romagna region of Italy, where Ferrari is based, and they built a 599XX EVO to auction off,” recalls Sloss of the $1.8 million car. “James Chou, our dealer, called us and I thought some billionaire would snap it up. But we won the car.” He requested a rendering in the colors of the regional flag. “It was perfect,” he says. “[Now] almost all our Ferraris are yellow, either Giallo Modena or Giallo Tristrato. Many of them have Blu Scozia accenting.”

Of the racing scene in the tech world, Ben says, “There are a handful of people at Google who race, and all of us recognize that this is a fun hobby — there’s not a lot of aggression and dirty driving. We’re all achievement-focused, and the racing doesn’t get to the point where we’re going to ruin the work relationship.” When asked if he’s ever discussed his hobby with Sergey Brin or Larry Page, Sloss laughs, “No, I never have, it’s always about work.”

Joshua Schachter, a longtime technical consultant on HBO’s Silicon Valley, confirms the same attitude toward racing among techies: “I don’t generally have any business dealings with people I race against.” As for what it’s like being a woman participating in a male-dominated sport, Christine says, “You have to be very courteous and serious, try not to be too pushed off by other people and stick to your line. Some are gracious drivers, others have race face. I don’t let it bother me.”

According to Boningue, “there is a certain bipolar aspect” to car collecting in Silicon Valley. “I would say it is a bit taboo, where some big tech companies — though not Google, where Ben works, to my knowledge — actually have directives for their execs not to talk about their car collections. ‘Show-off’ is generally frowned upon. There are a few exceptions: events where [you’re] sharing a super-rare car with the public, where kids can see something they never would have otherwise, have an educational aspect.”

Ben insists that he and his wife aren’t “really” collectors. “We’re enthusiasts, and if you marry another enthusiast, you either go bankrupt or run out of garage space. My job is to run out of garage space before we run out of money.” As for the best collection he’s ever seen outside of his own, Ben, who just added a McLaren Senna to the mix, says, “We’ve visited Jay Leno’s hangars in Los Angeles. Jay’s a very bright, very enthusiastic driver with the most amazing collection I’ve ever seen.”

Find out how HERE. 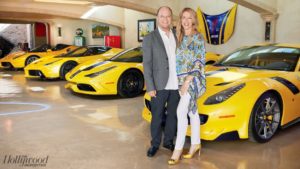 “They live with their respective racing teams,” – Ben Sloss, VP Engineering at Google.

Check out an exclusive look of the 2018 Ferrari Challenge Finali.

Follow us through the installation of a ceramic coated piston into a Ferrari 488 Challenge engine.